Another free video slideshow program. I still like the one that 1MB made better. Â Ours allows you to put text effects overtop of your images. Â It also knows how to fade in and out of clips and music to create an endless looping advertisement. Â The same software is used on our 1mb.ca home page.

I gave photodex a shot; here’s what I came up with in about 5 minutes:

I was poking around in the lab and playing withÂ dcpromoÂ again.Â  Apparently that is the only way to invoke directory services in 2008 R2Â despite having an option to install it via the guiÂ (option is available under add/remove roles).Â  If you select the “Active Directory Services” role from the gui, you will still need to run the dcpromo command; soÂ I just skip that stuff and do it all at once.

As usual, theÂ dcpromo commandÂ should be launched from a command prompt (or a run box) which in turn starts a graphical wizard to install the service.Â  The graphical interface pops up during the full version of windows 2008 as well as the server core version.Â  Also the DNS role gets added automatically and would have to be removed manually if you didn’t want to have DNS on the domainÂ controller; personally I can’t really see a reason to remove it other than reducing the overall security footprint of a DC which is a bit ridiculous so I just leave it in there.Â  Besides; have you ever ran AD without integrated DNS?Â  I can’t imagine it would be easy to support. 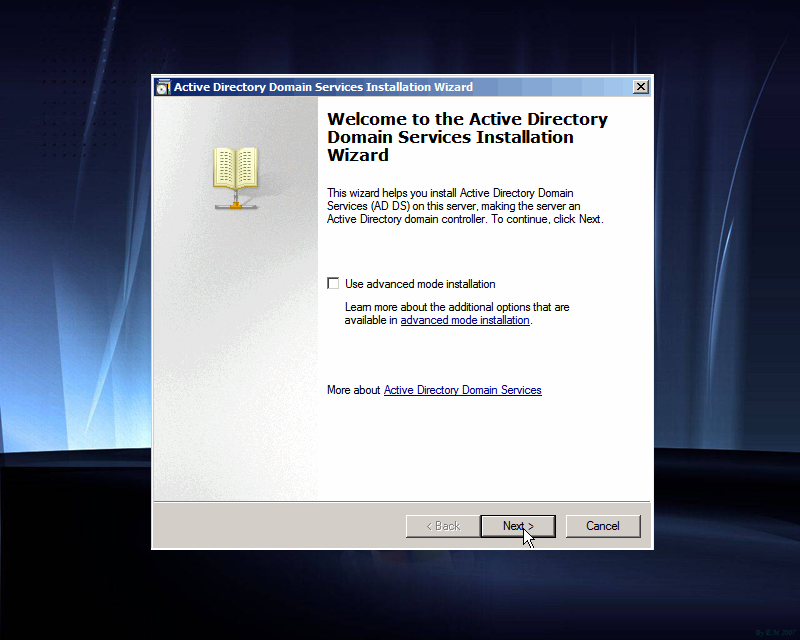 I opted to create a second DCÂ in the labÂ and just for variety I chose to use the bare bones installation onÂ server core.Â  Pretty basic stuff here as well except that network teaming can prove to be a challenge without a graphical interface (HP team utility required that I had to configure the team on a working graphical DC and then export the XML configuration file and overwrite the server core team file).Â  After rebooting and fiddling with netsh a bit to configure the TCP/IP settings everything else was pretty much exactly the same.Â

Pretty cool stuff. I still have to try toÂ install the same thing using and RODC on server core. I wonder if I should try to do it withÂ an encrypted FS such as bit locker just to be fully secure.

Usually I would plan a production deploymentÂ of active directory for many months before running the command; it’s so muchÂ more fun in a test lab 😉 Things to consider would be your sites, subnets, DNS/WINS, backups, trusts, delegations,Â naming conventions among other things.Â  Strangely it’s not that complicated but there are so many different ways to do things it is often difficult to get everybody to agree to use MY way!Â

On a more serious note,Â if you ever wanted to remove the domain controller you would run the dcpromoÂ command again. Why is it not called DCDemoteÂ or something like that?Â  It’s aÂ bit confusing I think.Â  Remember that you shouldn’t just ad hocÂ remove your DCsÂ of course. There are plenty of online MicrosoftÂ resources warning and guiding you through the dangers of doing something like that.Â  You would definitelyÂ want to remove your DNS delegations and transfer the FSMO roles at a minimum before killing off a DC.Â  If the DC was the first one in your forest it probably holds other services such as the source of time for the entire forest.Â

As usual, be just careful and have fun!Â  Happy promoting!

1MB Corporation, a web hosting provider with an extensive background in the industry, strives to meet the demands of many individual and business customers around the globe. We are proud to be involved with our clients every step of the way and extremely happy to make them feel gratified with our in-house built web hosting platform, hosting plans,domain names and our FREE extra services.

Our web hosting services are based on reliable web servers, configured with the latest hardware available, which ensures maximum performance and minimum server load.

We use the latest advanced software out there to make your web site run as smooth and problem free as possible. You web site is maintained up to date with the newest software security patches and upgrades, which are rigorously tested and installed, shortly after their public release, to ensure the best performance possible.

We make every endeavour to serve your web hosting requirements and help you build and sustain a recognizable and successful online presence. Backing you up with our web hosting expertise is a great honour and pleasure for us. Of course, we must continuously strive to keep our services up to date with the latest trends on the fast-paced web hosting market.

Every server is equipped with the latest Intel Processors, large amounts of RAM and high-speed caching RAID controllers. Our network architecture utilizes the top class Enterprise routing and switching engines from Juniper and Cisco.

Our web hosting platform is Linux-based, offering a stable working environment with minimum server load. Besides, our servers are equipped with a full range of Linux-compatible software programs for running all the applications that you need to perform regardless of the operating system that you use.

Our platform has been implemented through a very productive partnership with LiquidNet Ltd., a UK based web hosting company, specializing in the development of cutting edge solutions for the IT industry.

Our long term collaboration with LiquidNet Ltd. has enabled the creation of a high-powered, trustworthy hosting service that gives you total control over all aspects of your web site.

As an active Technical Architect I encounter and (sadly) use a lot of buzzwords. Although the buzzwords are not technical in nature it would seem that my clients and colleagues just love hearing them. I don’t know what it is about the buzzwords that makes things easier for them to understand; actually I almost think it does the opposite of helping people understand. It certainly does help me sell the idea though.

The best part of the buzzwords is that you can string them together like, “A strategic decision was made with substance that aligns various business and IT verticals to achieve an overall holistic view.” Damn… I sound smart; too bad I didn’t actually state anything.

Well, I’ll be adding these buzzwords throughout my writing, so keep your eyes peeled!

Over the past couple of years, my company, the 1MB Corporation has made great strides in development and consulting services. Â As a newly formed company we spent a lot of time consolidating our services in the areas of web hosting, programming libraries and support. Â This has enabled us to provide severely reduced costs in development, procurement and ongoing sustainment.

One of our major accomplishments was consolidating and updating our PHP library to be in a modular (reusable) format. Â We have a very robust user management and security system that has been put to the test time and time again; evidently it scales nicely! Â Some key areas of development have been in the areas of clean reusable user interfaces, file management, advertising, SEO, navigation, HTML templates, salesÂ management, securityÂ management, accounting integration, image management and MANY more! Â Needless to say we are excited about our offerings to any sized business large or small.

We continue to stay focussed with our overall company vision, “Smart. Quality. Simple.” Â The future is looking great for us; for more information check back at http://1mb.ca.

What if yoda was evil? 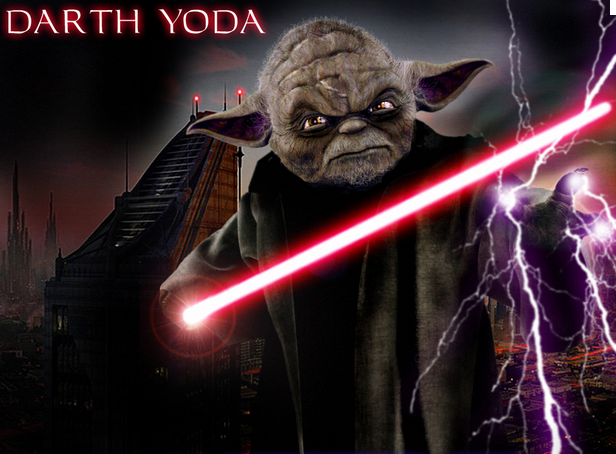 May the 4th be with you… always.